Japan, the home country of Daifuku is well known for earthquakes, where they are a daily occurrence. That environment has given Daifuku a wealth of expertise on how to maintain material handling systems in earthquake-prone areas.

When we look at the world, China, Indonesia, New Zealand, Turkey, the United States, Italy, and Chile are also known as earthquake-prone countries. When planning automated warehouses in such locations, measures against earthquakes may be required.

Why Seismic-Resistant Equipment is Needed

Despite the general image of an earthquake causing structures to "collapse," when racks are designed in line with safety and construction regulations, seismic activity has minimal impact on them. Rather than damage to racks, earthquakes more commonly cause the following issues:

Business continuity planning (BCP) has become a must for companies that handle food, pharmaceuticals, and other vital products. Daifuku offers a variety of seismic-control solutions that can be applied alone or combined according to needs.

One of the effective ways to minimize the risk of loads falling over on pallets is to stabilize them by stretch-wrapping or binding. While wrapping the entire surface of the pallet load provides better results, if operational reasons prohibit that, our experiments have shown that even just wrapping the top level of cases on a pallet is beneficial.

The fixed stoppers installed in rack locations prevent pallets sliding into crane aisles during earthquakes. However, since the stoppers alone cannot prevent load collapse on pallets, they can be used in combination with stretch wrapping and binding to provide greater load stability. In addition, by attaching the stoppers with shock absorbers, which absorb the shock when pallets and stoppers collide, the risk of load collapse can be further reduced.

The seismic damping components incorporated at the top of a rack suppress swaying by converting the collision energy to heat.

By making the AS/RS seismically isolated from the building, earthquakes will have little-to-no direct impact on it. Depending on needs and your facility's building structure, it is possible to apply seismic isolation only to the AS/RS rather than the facility as a whole, which can reduce costs. 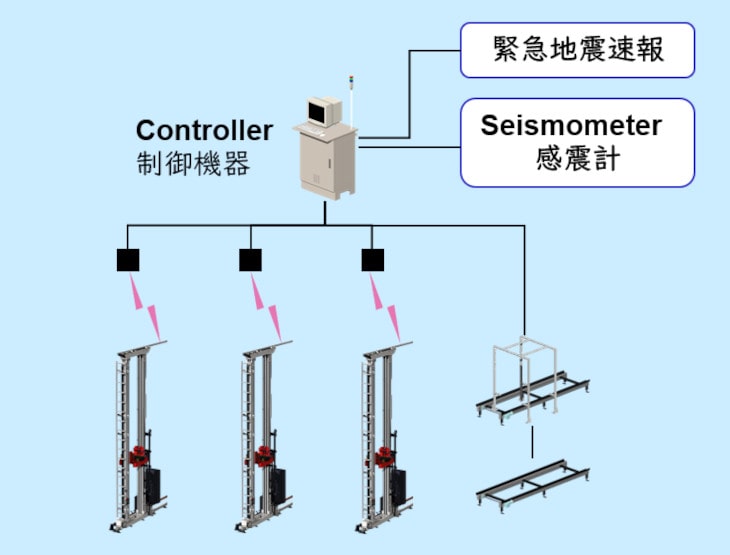 When the seismograph detects a significant tremor, the equipment controller sends cycle stop signals to all equipment to reduce the potential for damage.

Ordinary random storage management places pallets in any available location. This means that tall, unstable loads may be stored on higher levels where the impact of earthquakes is greater. With load stability information registered, the WMS can limit location assignment for unstable loads to only lower levels, reducing the risk of falling during earthquakes.